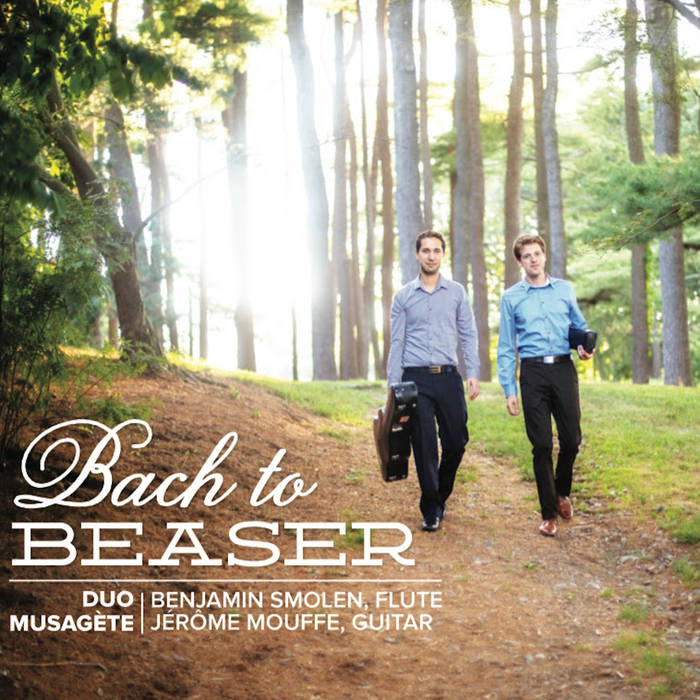 The ‘Bach to Beaser’ project has been a dream of ours since the first time we performed Mountain Songs many years ago. The repertoire on this album represents many different influences on our artistic path since founding Duo Musagete. First and foremost, it represents the vision of our teachers and mentors, Paula Robison and Eliot Fisk. They have been trailblazers in the flute and guitar genre, commissioning new works (such as Mountain Songs) and transcribing countless masterpieces (such as Eliot’s reworking of the London Trio, featured here). Their spirit of innovation also led us to create our original versions of Bach’s canons and Shostakovich’s fugues. This album came to life with additional inspiration from Robert Beaser, whose generous and tireless support has helped mold our conception of Mountain Songs into what it is today.

We hope this music will bring as much joy and inspiration to you as the process of creating it has brought to us. Many happy listenings!

ABOUT THE ARTISTS
Benjamin Smolen is the Principal Flutist of the Pacific Symphony Orchestra. He is the winner of the Haynes International Flute Competition and the James Pappoutsakis Flute Competition and prizewinner in the NY Flute Club and National Flute Association Young Artist Competitions. He holds degrees from the New England Conservatory and Princeton University, where he studied with Paula Robison, Michael Parloff, and Jayn Rosenfeld.

Jérôme Mouffe has toured throughout the United States, Canada, Mexico, and Western Europe as a soloist and chamber musician. He serves on the faculties of the New England Conservatory and Bridgewater University. He received his Doctor of Musical Arts degree at the New England Conservatory and also studied at the Universität Mozarteum Salzburg and the Conservatoire Royal de Bruxelles. His teachers include Eliot Fisk, Ricardo Gallen, and Hugues Navez.

Bandcamp Daily  your guide to the world of Bandcamp